You are here: Home / iPhone / The 9 Most Common Ways to Damage Your iPhone

Every day, another person accidentally damages their iPhone. But if you learn from their mistakes, you can keep your iPhone safe.

iPhones are some of the most popular and long-lasting phones on the market. They are known for their durability and high-quality; however, they are not indestructible. Instead, in some ways it’s worse to damage a iPhone. While other phones can be fixed or have their parts replaced, this is not so easy for iPhones.

In this article, we will list nine of the most likely ways you could damage your iPhone. By familiarizing yourself with this list, you can keep your iPhone as safe as possible

Many people damage their iPhone by spilling liquid on it because they weren’t being careful enough when handling liquids around their phones. This is because lots of people aren’t aware that although iPhones are water-resistant, they are not water-proof.

If water seeps into the iPhone, it can short circuit and rust the internal components, rendering the iPhone unusable. To prevent damage from spilled liquids, you should be careful when handling liquids around your iPhone.

From cracking the screen to damaging the cameras, there are a lot of possible consequences of exerting undue pressure on your iPhone.

The vast majority of people damage their iPhones by sleeping beside them and unknowingly rolling onto the iPhone while they’re asleep.

iPhones are fragile devices and aren’t able to take such pressure, especially on a regular basis.

iPhones are particularly vulnerable to damage from being dropped because of their all-metal unibody design. If a iPhone is dropped, it is very likely to become dented, which can permanently damage the phone. Here are a few possible outcomes of dropping your iPhone:

To prevent your iPhone from being damaged if it is dropped, you can use an iPhone case and a screen protector. Ragged cases work particularly well in preventing such damage.

4. Scratching the Surface of iPhone

Although iPhones are built to be scratch-resistant, this does not mean that they are scratch-proof.

Over time, objects can rub up against iPhones causing both dents and scratches.

Many people damage their iPhones by accidentally scratching them.
Here are some of the common ways users might scratch their iPhones:

Some iPhones frames are made with an anodized aluminum chassis, which is a type of aluminum that has been treated to make it more durable and resistant to corrosion. However, this treatment can be damaged by harsh cleaning agents (like acetone, ammonia, hydrogen peroxide, or abrasives) available as household cleaners.

These agents can strip the anodized coating from the aluminum, leaving it susceptible to corrosion and other damage (like discoloration). Instead, you should always clean your iPhone with a soft, lint-free cloth lightly dampened with water or a mild cleaning solution.

6. Leaving iPhone in a Hot Car

Leaving a iPhone in a car is yet another way users can damage their iPhone, as the temperature inside a car can rise to well over 100 °F within one hour if it’s parked in direct sunlight. iPhones are not designed to withstand such high temperatures, and this can lead to permanent damage, like a swollen battery, a warped screen, and—in worse cases—melted internal components.

Avoid leaving your iPhone in the car for starters. But, if you must leave your iPhone in your car, then try to park in a shady spot, and if possible, leave the windows slightly open to allow for some airflow. Make sure your iPhone is well out of sight if you choose this option though.

7. Exposing It to Dust or Sand

According to report, one user got some sand into their iPhone, which damaged the lightening port. When they took the phone for repair under warranty, Apple refused the claim, calling it “user created.” So, if you don’t want to spend money to replace your phone’s lightening port, don’t let dust and sand accumulate in your iPhone.

This problem is particularly relevant for users living in dusty areas (like the Middle East) or near beaches. And not only can the accumulation of dust and sand damage the lightening port, but it can also damage the screen, speakers, and microphones on your iPhone.

To prevent this from happening, try to keep your iPhone as dust-free as possible. Avoid using it in dusty and sandy areas, if possible, and cover it with a case and apply a screen protector.

It’s common for users to use third-party chargers for their iPhones because they are so much cheaper than those sold by Apple. However, these cheap, knock-off chargers can end up damaging the iPhone. This is because original Apple chargers have many security features which these knock-offs lack. Those features help protect the iPhone from problems like power surges.

Potential consequences of using third-party chargers include fires, explosions, and damage to the battery. So they’re not only bad for your iPhone, they can be dangerous to you as well. To avoid this, only use chargers that are sold or certified by Apple.

9. Using It With Sweaty Hands

Perhaps one of the worst things that users can do to their iPhone is to use it with sweaty hands. The reason for this is that iPhones are anodized. As explained above, anodization adds a protective layer to the metal, but sweaty or moist hands can wear away this coating, discoloring the iPhone in the process. This is permanent damage, and it is not covered by Apple.

You can prevent this damage by keeping your hands dry and clean, applying protectors to your iPhone’s screen, or using a case.

Take the Right Precautions to Protect Your iPhone

An iPhone is durable, but not as durable as many people think, which is why you can end up damaging it in so many ways. Who knew that using a iPhone in dusty areas or with sweaty hands could permanently damage it? At the end of the day, iPhones still require careful precautions to keep them working for as long as possible.

This raises the question, how can one protect their iPhone physically? A few smart investments—like a case with raise bezels around the screen, screen protectors, and MFi certified charger—can get you started. 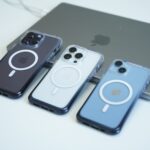